This is not possible because k8vavoom’s VavoomC implementation is not backward compatible so we’d have to rewrite the entire mod (thousands of lines of code).

https://doomwiki.org/wiki/K8Vavoom k8vavoom is a modern fork of Vavoom. It’s in active development and offers such upgrades as: – The one you are the most interested in. 😉 Updates to VavoomC and a standalone VavoomC “player” VCC – Updated and streamlined video subsystem – OpenGL 2.1 / OpenGLES 2.0 – D3D/Software are removed – Proper display/window modes support – Better lighting and post-processing effects (tonemaping anyone?) – Modern build setup (GCC 10, SDL2 etc.) – Effortlessly cmpiles/runs on Linux (I use Arch BTW) – Bazillion of tweaks and settings – Context help in menus! – Built-in gore/gameplay mods (this one can be undesirable but should be easily removable considering the modular nature of Vavoom) – More (G)ZDoom compatibility – DECORATE was updated too – Many more stuff I don’t even know myself yet. One caveat though. The author stated he mainly focuses on Doom support and don’t test other games compatibility so regressions could be present. I tried running original HeXen and at least the first level seems fine. Some background. I tried running KMod 5.2 on my Manjaro Linux. Saw a Linux binary and script to run there and tried to run them. Unfortunately all I managed to get was uninformative crash with core dump right after engine init. Tried to run the mod under k8vavoom but it seem the “-game” switch works differently here and only loads one of predefined game from “basev/games.txt”. I installed it as an AUR package and didn’t bother with tinkering with files in “/usr/share/” or compiling and installing it manually. So in the end I’m just running it through wine. Work almost flawlessly to my surprise. Anyway I though that maybe you could update your mod to build for k8vavoom and bundle it as a standalone game how you did with the current version.

Many maps are unworkable. For example look at Thystes. There are blank areas near the entrance to the Cathedral.

Update: a screenshot has been added. 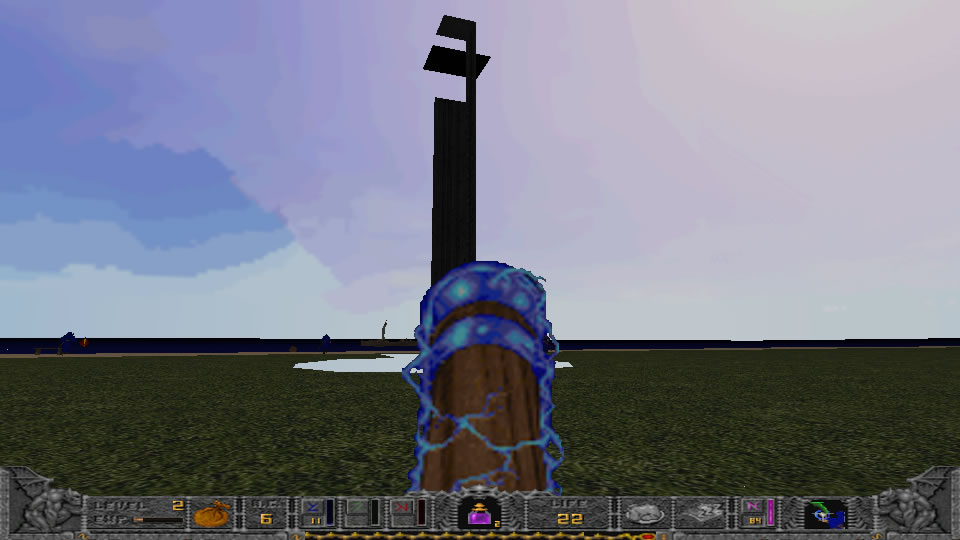 You may or may not know this already, but I wanted to present the issue to you guys. While viewing the automap, by pressing the “tab” key, I noticed that you can always zoom out but never zoom in. I tried to fixed this in the mod’s config file, but still got the same outcome. Binding other keys doesn’t work and can still use the ‘-‘ key (between the “0” and “=” keys) to zoom outwards. But trying to bind a key to zoom inwards never works. Please help me out here. This little problem is so annoying when you cannot zoom in while viewing the automap.

First I have played through the UTUBE preview of the next version. It is very impressive.

I have suggestions that would improve the playability of the game.

Allocate each defensive spell a key on the keyboard rather than having to navigate between them.

Suggestion two.
The problem is when you are fighting a powerfull monster using icons of the defender and pounding the monster with masses of time bombs. When the invulnerability created by an icon of the defender wears off you have to scramble to use the next one and then switch back to the time bombs.
My initial thought was to use a hot key for icons of the defender. This would make life much easier.
Then I thought of a change which fits in with the philosophy of the game.

In addition to the existing initial spell create an invulnerability spell for all three classes available at start of game which works if you have icons of the defender and uses one.