Although I do not position myself as an usual mapper inside Korax Team, sometimes I become inspired to design a piece or two (an inspiration should be strong enouph for me to overcome my eternal lazyness, hehe). This time I was impressed by latest RambOrc’s Big City version and decided to make something so nice and pretty-looking. Thus came the idea of a town-on-the-hill.

Right now I do not have the idea of how it could be connected to the world of Scattered Evil, this may be just another one peaceful hamlet, or fortified town of mountain people (dwarves?), or an abandoned village full of ominous beasts, whatever; I am still working on it.
Here are some shots which show the progress of “cutting” this settlement from the solid rock (click to see in maximum size): 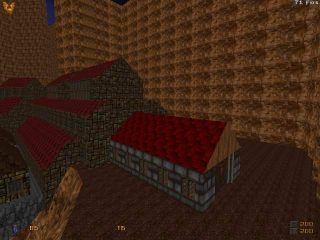 The first internal build is nearly done; too pity I cannot show it to common users (a developers’ secret, heh), but at least I am not prohibited to speak a little about what I have already achieved.
As I already mentioned earlier , monster AI is of high importance for our new game. At current point I will state following:

The 14 august 2007 was the historical day for Korax Heritage project. 🙂 Latest Vavoom progs were uploaded to our SVN repository on sourceforge.net, thus updating long-time-ago created KoraxRPG project. From now on KoraxRPG (Vavoom powered) will be coded and designed until final 1.0 release, and, hopefully, further.

Primary task stated for coders is copying RPG system, featured in last KMod3 version, to Vavoom platform, alterating and enhancing if needed; plus all the extra stuff like damage skins.
Afterwards, as planned, a lot of new ideas and concepts should be implemented.

High on the list stands creature AI. Basically, it should be divided into 3 “levels”; first “level” is pathfinding. I have already created an experimental algorythm which made monsters use node graph (built with common mapspot objects placed on map) to determine most effective way of moving to player. Compared to original Doom engine “pathfinding”, results were fantastic! However, whole thing worked very slow and caused game to freeze periodically. I had a guess then, that main reason is general slowness of Vavoom progs execution; now, when Vavoom seem do it faster I may try this again; and still there’s last option – to put pathfinding procedures into engine itself. Last variant will make it much faster, however there will be an obvious disadvantage: if Janis Legzdinsh won’t allow to put such a thing into main Vavoom engine, we’ll have to create separate executable for KoraxRPG.
Second AI “level” should allow to give tasks to creatures using map scripts (ACS); this should include all the possible basic orders like “wander around” “defend the area”, “goto”, “attack creature/player” etc.
Finally, third “level” is personal Behavior. Primarily configured in code and customizable by map script this should make creatures and NPCs more alive. It will be more complicated, but I belive we can do them have scheduled tasks and predefined reactions on game events.

After all, I am expecting creation of a good amount of new monsters, weapons and spells.

As for extra stuff, me, personally, would like to have some fun and implement new theatrical effects like player view shaking and swaying when player is wounded, toxication simulation and so on.

Okay, people, trying to think of what can I write in these Development Blogs, I decided to state following. We are approaching Korax Arena public beta release. Hurray. Period.

Most recent additions that might be interesting to potential gamers. First of all RambOrc’s sweetest dream finally comes true – now player will have Alternate Attack option, by which he will be able to fire Discs of Repulsion and Flechettes. Flechettes have three modes of usage – Grenade, Bomb and Poison Cloud, – and every class have access to all three of them. Now everyone is free to spoil the air not only by yer breath, but by spawning toxic clouds as well. No objections from environmentalists are accepted.

Secondly, I have created Team Selection window on my own risk (since nobody else mentioned it should be there…). Now player may explicitly select what team he wants to join in any team game mode. Oh, excuse me, I mean he MUST explicitly select the team. No more freedom of implicit colour selection; totalitarism is back… Bla bla bla.

Lastly I wish to mention a new user-friendly option for automatic bot spawning at game start-up. No more hard-typing “addbot” in console, simply say “I want fifteen bots in the game! Now!” …and you get seven bots (just because it is maximum). Cool.

PS. Funny, I occasionally found out that Quick Save and Quick Load commands were still active in multiplayer… although they didn’t seem to work, I removed them without a sign of remorse.

I invented a new weapon for RPG Trilogy, most probably suitable for some boss creature. Weapon is a spell that summons number of spikes in front of caster and raises them. Each spike’s position and delay before spike raise are choosen randomly from a predefined range, and this makes weapon more effective and spectacular. But what is more important – is the fact that a spike, as you may remember from time playing original Hexen, does ultimate damage killing any creature instantly. Now imagine overall power of this weapon…

Here are some shots taken while testing this weapon (I used Cleric’s Firestorm slot for the test).