For those who have followed this project since the early days, the original alpha town (in the final version the plains city called Ocadia) was chock full of “ice cubes”, as the early builds were using the KMOD 1.x engine that only allowed for replacements of existing textures, not adding new ones. In later builds, the ice textures used for houses were reverted to their original skins, making the town look “cool”. As part of the upcoming beta release, due to a massive cleanup now all the houses in this city look like actual houses. 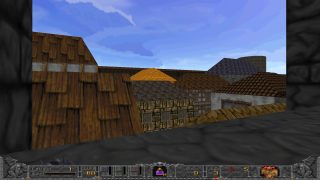